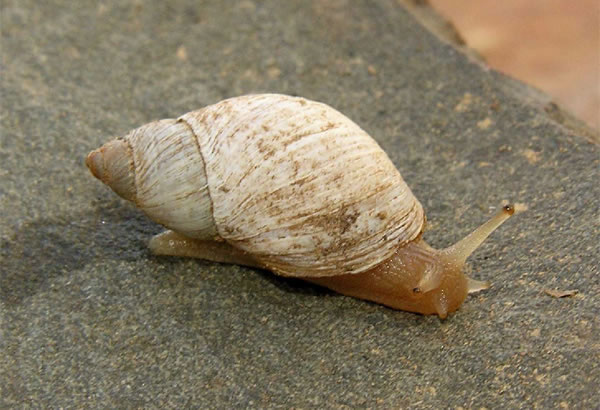 No living specimens of any of the described species of the genus had been collected for over 50 years. “We have studied our specimens, using methods including micro-dissection, scanning electron microscopy, and DNA sequencing. The results were astonishing! Comparative analysis of the morphology of the embryonic shell, the radula and the reproductive tract, as well as DNA sequence data showed conclusively that Prestonella belongs to the family Bulimulidae.” says Dai Herbert.

Why was this so surprising? Well, simply because the family was hitherto unknown on our continent. Considered of Gondwanan origin, the family is most diverse in South America, with representatives also in Australasia, but none had ever been described in Africa. Now we know that our seemingly unprepossessing /Prestonella /species descend from an ancient lineage of snails that became isolated from their relatives at least 90 million years ago, when Africa separated from South America during the break-up of Gondwana. They cling on tenuously, in specialized habitats, as remnants of the supercontinent, and we need to conserve them carefully for their significant contribution to the phylogenetic diversity of the southern African fauna.

On the 2 March 2010 Dai Herbert and his group were joined by Janine Fearon, from Rhodes University in Prof Nigel Barker’s lab. She is studying the population genetics of these snails which, because of their specialized habitat requirements and very patchy distribution, are likely to show interesting features. For this she needed to obtain DNA samples from several individuals at each locality, in order to get an indication of the genetic variability both within and between populations.