There was once a tiny ground squirrel in the Karoo who lost her family. Unsure what to do with this utterly wild mite, the farmer on whose land she lived put the infant squirrel in a run with the hens. But the chickens thought it was a rat and ganged up on it. Pecked and petrified, she was brought to the Karoo town of Cradock and found a home with the Rademeyer family in Victoria Street. They called her Chippie, because she looked like a chipmunk.

At night, she’d sleep under a blanket, and by day, she’d wander around their house and garage. Gradually she was filled with an unconquerable urge to dig. First she tunneled a hole under the garden path.
Then she started on the pavement. Before long, the pavement all down the street was riddled with interconnecting underground lairs.

She carefully lined them with fallen leaves and shredded newspapers, and would dive in whenever she felt threatened or wanted a nap.

Chippie adored peanuts, sunflower seeds and mielies. She was cheeky, and would taunt the neighbourhood cats by coming at them on her hind feet, little clawed hands outstretched, all the better to bite their tails – the Nut Kraken. 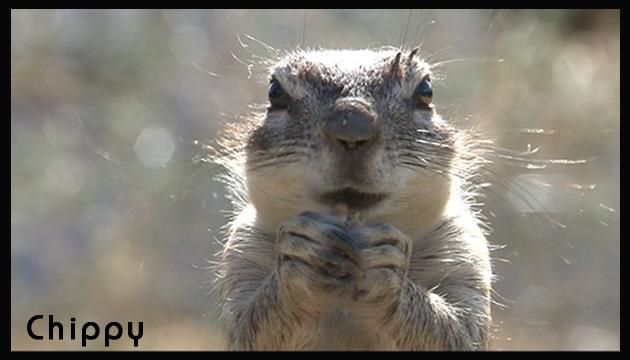 The people of Cradock adored her. Every day she’d have visitors, some of them large men who’d sit down on the ground to play with her, utterly charmed by this sweetly impudent, shin-high rodent.

But no one could bear the thought that she might be killed by a dog or a car. So she was taken to Ganora, a farm where other ground squirrels and lots of rehabilitated meerkats live near Nieu Bethesda. And she’s living happily ever after.

Sadly, during heavy rains in February 2011 her burrow was washed away, but we still hope she survived.