The story of palaeontology in South Africa is also the story of personalities, such James Kitching, who was brought up in Nieu Bethesda, became internationally renowned for his uncanny ability to discover fossils and later became professor in palaeontology at the University of the Witwatersrand. In 1970 he was the first person to collect and identify a specimen of a Karoo therapsid in Antarctica and so demonstrate that Antarctica and southern Africa were once connected.

The Karoo tells the story of life in South Africa 253 million years ago during the Permian Period. This was 50 million years before the first dinosaurs, a time when the continents were joined to form the supercontinent, Pangea, and the mountains of the Cape were the size of the Himalayas. Proof for the existence of these animals and plants may be found in the rocks surrounding Nieu-Bethesda. At the time the area around the present day Nieu-Bethesda was covered by huge meandering rivers which flowed in a northerly direction. The floodplains teemed with prehistoric animals which died along banks of the river, were covered with mud and are today preserved as fossils.

The rocks of Nieu-Bethesda are part of the Karoo Supergroup, which tell the story of life from 285 million to 180 million years ago. Enter a world without the plants and animals we know today. A time when there were no flowers or grasses, no mammals and no birds. Humans would only arrive on scene around 250 million years later. At this time the mammal ancestors (or therapsids) ruled the Earth.

Prehistoric Plants And Animals Of The Area

The chief predators of the Permian period were the gorgonopsians, or ‘terrible eyes’, with dagger-like canine teeth like those of sabre-tooth cats. Rubidgea, a tiger-sized animal and the largest gorgonopsian, which roamed the floodplains of this area was a formidable carnivore. The gorgonopsians preyed on the herbivorous dicynodonts (two dogteeth), which had beaks like tortoises and defended themselves with a pair of tusks like those of a warthog. Aulacephalodon and Dicynodon were two large dicynodonts that wandered in herds around the Nieu-Bethesda area 253 million years ago. The pareiasaurs were another group of plant eaters that grew to the size of a cow. These animals may have been relatives of the tortoises and turtles. Ferns and horsetails, which were common at the time, may still be found in damp spots today. The forests were dominated by Glossopteris trees whose fossilized leaves formed the coal which is mined in South Africa today. 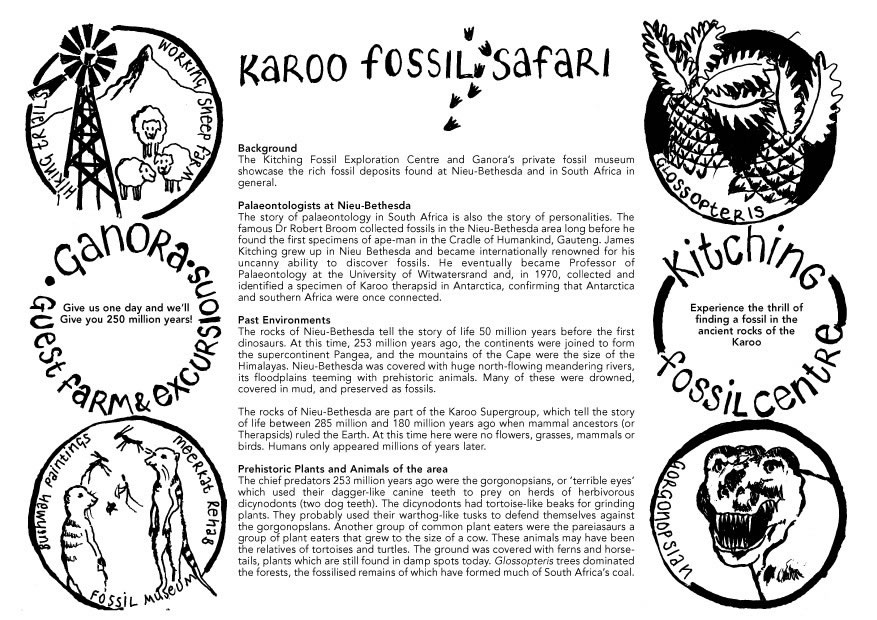 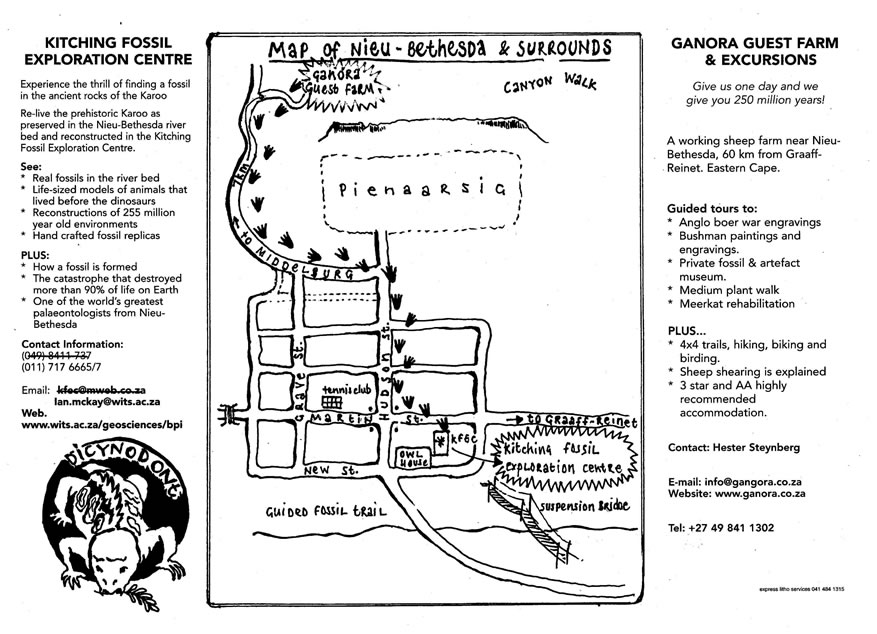