Drylands cover >40% of the Earth’s surface and are projected to expand by up to another 16% by 2100 due to climate change. Legacies of past-river sediments in South African drylands indicate varied hydro-environmental conditions in the last 125,000 years to present. Frequently described as “cut and fill”, there have been phases in the geologic past when channels have incised (cut) and transported sediment and soil out of their host catchments, but conversely, periods where sediments removed from the slopes have accumulated in the valley floors (fill) and new soil has been formed. The timing and causes of the most recent incision phase are still debated. Some scientists argue that overgrazing following the European incursion was the main driver of gullying and soil erosion, whilst others have attributed incision to abrupt changes in climate. Prior to this incision, valley floors were infilled to a much higher level (4-6 m) than the present, with low energy channels, floodplain and wetland systems.

The channels near Ganora expose a legacy of “cut and fill” features in the form of: 1) infilled gullies; 2) semi-continuous, former river levels (terrace sequences); and 3) buried soils, representing earlier land surfaces. This implies that there have been prior phases of geomorphic instability and stability in this region. Climatologically, the Sneeuberg lies at a major junction between winter rains derived from frontal systems originating in the Atlantic and summer rains sourced from the Indian Ocean. The evidence suggests that this boundary has changed geographic position in the last 20,000 years. An ongoing challenge for geomorphologists trying to identify changes in the landscape is determining whether “cut and fill” dynamics reflect processes that are externally driven (i.e. climate, tectonism or land use change) or are internal changes within the catchment system (complex response, geomorphic thresholds, self-organisation). Further complexity is added when valley fills are eroded, creating gaps in the very record needed to interpret past environmental change. 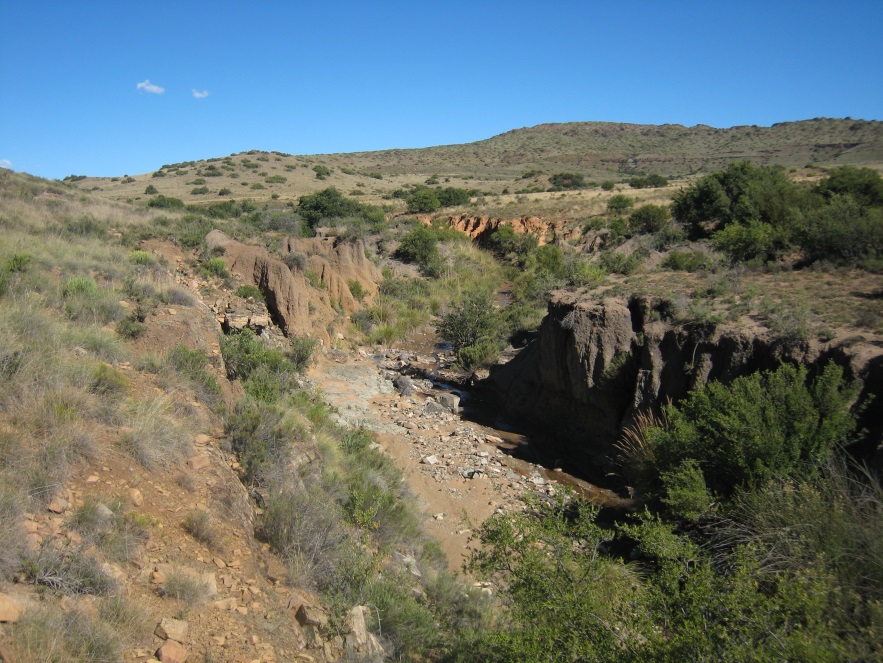 Dr Chris Oldknow is a fluvial geomorphologist and recently completed his doctorate at the University of Liverpool, United Kingdom, under the primary supervision of Professor Janet Hooke. The aim of his research was to develop an understanding of the characteristics, mechanisms and drivers of landscape evolution in the Sneeuberg. A combination of aerial image analyses, geomorphological mapping, sedimentological investigation (logging of sediments, grain size, mineral magnetic and thin section analyses), and geochronology (luminescence and radiocarbon dating) was used to outline and explain the timing, patterns and controls of erosion, sedimentation and soil formation in the Wilgerbosch River and two of its tributaries: Africanders and Wilgerbosch Kloofs.

If you would like more information about the outcomes of this project, Dr Chris Oldknow can be contacted at oldknow.cj@gmail.com or followed on ResearchGate (https://www.researchgate.net/profile/Chris_Oldknow).